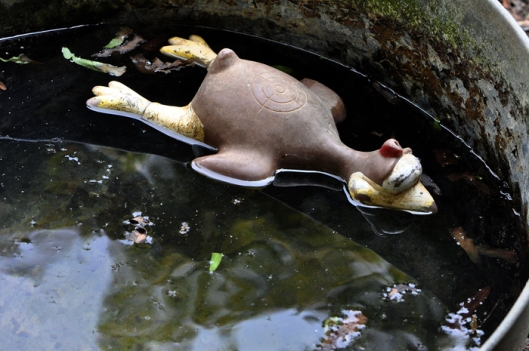 This is our dog Murray’s favorite toy – Chickenman. Named for my father’s favorite radio serial by the same name.

It cost .99 cents at Wal-Mart several years ago, but it’s worth a fortune to him. He LOVES this toy.

He offers Chickenman to whomever walks by – but he doesn’t REALLY want you to take him.

One afternoon, my husband actually got Chickenman away from Murray and threw him for Murray to chase. The only problem was, he threw him up in the air, and Chickenman landed in the tree.

Poor Murray. He searched and searched, but could not find his friend. After we stopped laughing, Joe’s solution was to throw another dog toy up in the tree to knock Chickenman down.

Good plan….in theory. What actually happened was two toys ended up in the tree. So, then Joe proceeded to get a pole to knock them both down.

After several attempts, we finally had two toys back on the ground.