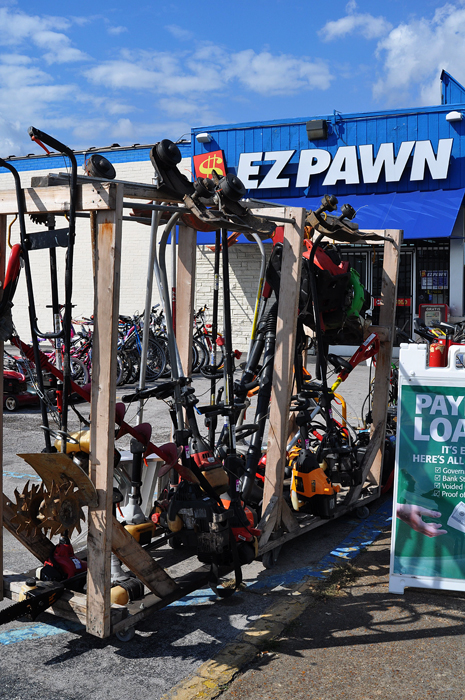 Inspired by yesterday’s photo, I decided to shoot something on the edgier side of town today. So when I got the chance, I drove to Rossville Boulevard to see what I could find.

It’s notorious for used car lots, pawn shops and adult bookstores. I was not looking for anything that was worth a documentary. I just wanted to find a photo that would pretty much sum up the area.

I turned around a couple of times in my search. I did not have a lot of time to spend on it, as usual; but I saw this EZ Pawn shop with a ton of stuff out front. I thought, “Why not?”

So as I was turning into the parking lot, I noticed a huge, deep hole at the front entrance to the lot.

“Hmm. Better not pull in this one. If my tire hits that thing, it will definitely bend my rim,” I thought to myself. So I drove a few more feet and turn into the second entrance. I parked and immediately started getting uncomfortable. Some people looked friendly. Others, not so much.

So, anyway, I decided to make the photo quickly so I wouldn’t get shot……but the composition wasn’t quite right. Darn it! Maybe I’ll move over. Nope. Still not right. Uh oh. More scary people.  If I just back up a bit ——————- CRASH!

I tripped into that darn mud hole. The very one I was trying to avoid when I pulled in. It was disgusting mud, too. But my first thought was, “Shoot! I hope no one saw me do that!”

My second thought was, “Darn! My sandals!”

I tried to wipe off most of the mud before I got back in the car, but it was futile. I ended up rinsing off my feet in the women’s restroom at work. But all that did was clog the sink with mud and rocks. And it took 15 minutes to clean my sandals. Well, they are as clean as I could get them there. I’ll have to work on them again later.

So, I ended up with a lousy photo of the day and muddy feet and ruined shoes. It was a lot worse than it looks here.

BUT! I got a funny story out of it. 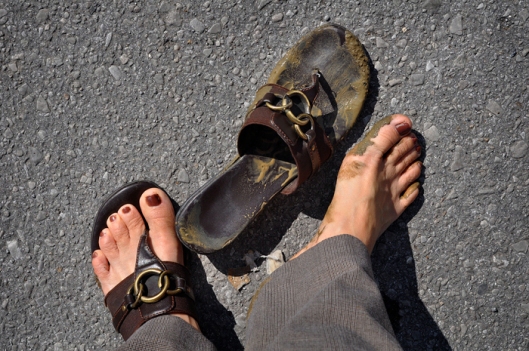