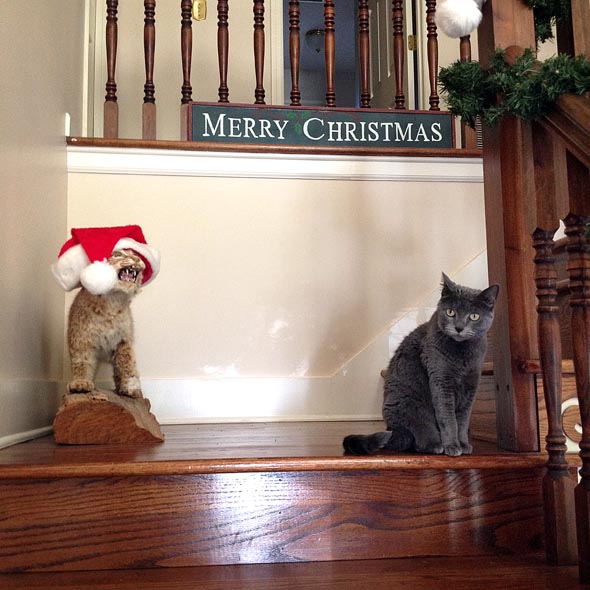 Why does HE get to wear the Christmas cap? Just once I’d like to wear it!!!

This is Bob and Sera. Bob is the one donning the hat.

Bob is our best pet. He never makes a mess, and he is extremely quiet. We like to decorate him for all of the seasons. He’s a BIG Alabama football fan, too. He has lots of hats for football season.

Joe’s dad bought this stuffed bobcat years ago at a garage sale. Unfortunately he failed to tell Joe’s mom he had purchased it. So when she started to get into the car, she spotted “Bob” in the backseat and screamed bloody murder. And then she proceeded to run away as fast as she could. She would have made it too, if it weren’t for that grassy slope she tried to scale. Her feet were just spinning in the mud.

According to the story’s legend, it took her a while to stop screaming.

Fast forward to a couple of years ago.

Joe had borrowed his dad’s truck to haul some stuff to the dump. I guess you can guess where this story is heading.

Yep. I hopped in the front seat of the truck and happened to look back to help Joe back up – and that’s when I saw Bob. ( Up until this point, I had no idea he even existed.)

I screamed! Joe slammed on the brakes and said, “What is it!”

Me: “There’s a bobcat in the back seat!”

Me: “There is a bobcat in the back seat! How am I NOT supposed to scream in a situation like that???! That was the LAST thing I expected to see back there.”

Joe’s father had put Bob in the back seat of the truck with the intention of taking him to the dump.

We decided to take him home to scare the cats. (If only I had taken video of the meet and greet.)

Let’s just say, it took a while, but they finally accepted Bob into the family. Obviously, we decided to keep him.

Joe occasionally puts the cats’ toys in Bob’s mouth to see what they will do.

They toys always wind up back in the cats’ room.

I guess they are not willing to share their toys with a stuffed bobcat.